A book about 2.5 thousand "Righteous Among the Nations" – Ukrainians who saved Jews during the Holocaust has been published 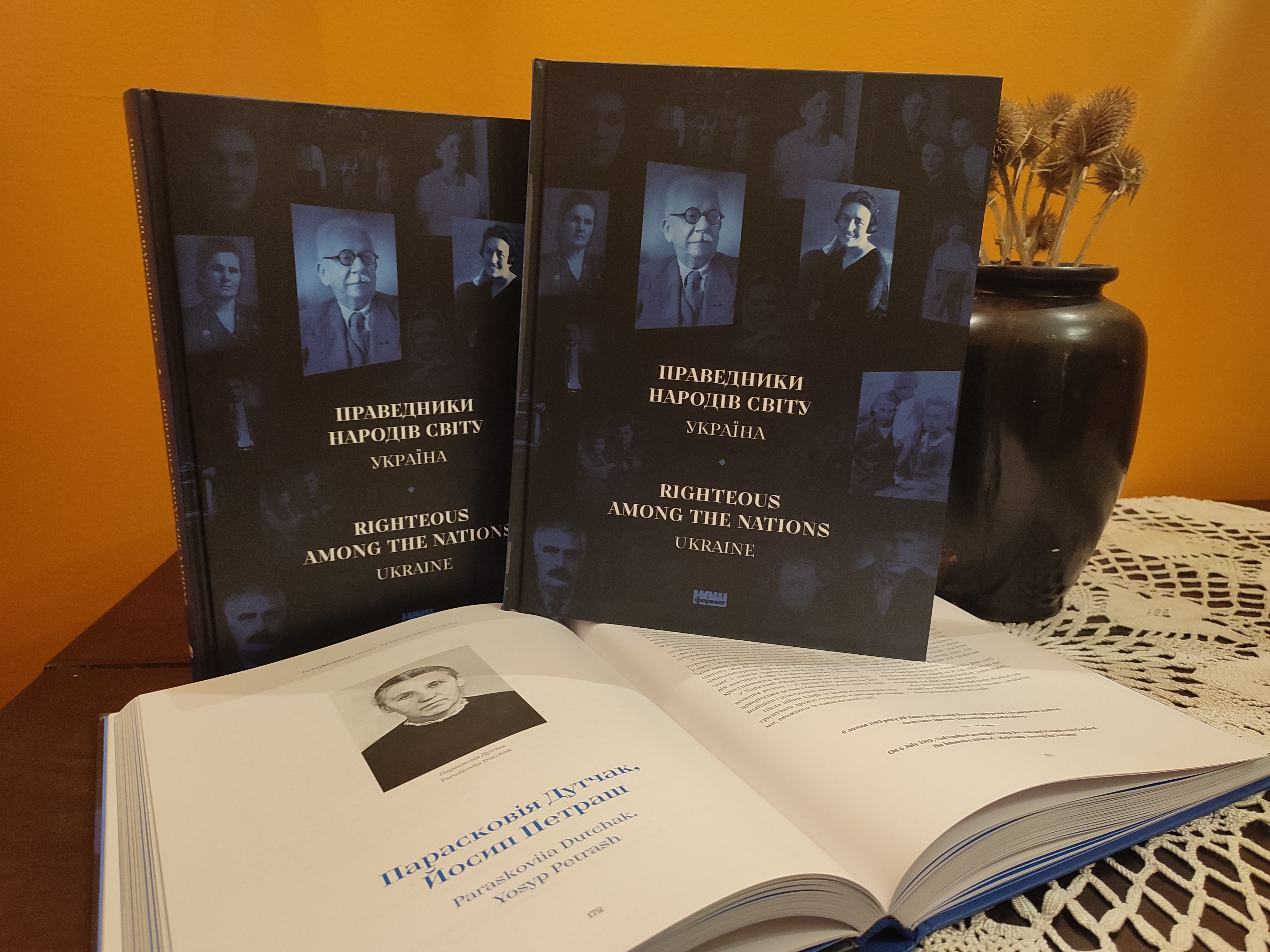 By the 80th anniversary of the Babyn Yar tragedy, the book "Righteous Among the Nations. Ukraine" about Ukrainians who saved Jews during the Holocaust has been presented. It not only mentions the names of 2,659 heroes from all regions, but also describes individual stories of Ukrainian Righteous Among the Nations and the rescue of Jews, with photos of the rescuers and rescued.

The publication was prepared by the Jewish Confederation of Ukraine in partnership with the Babyn Yar Holocaust Memorial Center and the Euro-Asian Jewish Congress. The book was created to commemorate the six million victims of the Holocaust and, in particular, the one and a half million Jews murdered directly in Ukraine. The tragedy of the Holocaust is revealed here through the stories of the rescue of Jews, full of drama and associated with an immediate threat to the lives of those who dared to provide this assistance.

The preface to the book was written by the President of Ukraine Volodymyr Zelensky. "They don't always make movies about them. Streets are rarely named after them. But their contribution to the victory over Nazism is no less... They had no weapons, but they defeated Nazism with humanity, sacrifice, kindness, and great courage. They saved Jews at the risk of their own lives. They knew that the Nazis could kill yourself and your family for any help to the Jews. But their big hearts proved to be bigger than the fear... This book is a source of stories about the Righteous Among the Nations from Ukraine... Our duty isto know their history and transfer from generation to generation in order to preserve the bright memory of each of them forever", – the Head of state noted.

In the preface to the publication, the President of Israel Yitzhak Herzog also mentioned the exceptional feat of the Righteous . «We will always remember the courage, humanism and compassion, which gave strength to these righteous people to preserve their moral qualities in the darkest times of world history and save innocent souls. Their deeds are forever written in sacred letters in the annals of the Jewish people and all mankind. The stories of the Righteous Among the Nations are a special part of the tragic history of the Holocaust. They prove that we always can choose as individuals, as a community, as a nation and as a people",- he stressed.

In Eastern Europe, said the chairman of the Supervisory Board of the Babyn Yar Holocaust Memorial Center Nathan Sharansky, they have been trying to hide historical evidence of the Holocaust for too long. It's time to fix this mistake. "It is necessary to tell priceless stories of the Righteous not only for honoring their blessed deeds with memories of them. Their courage, kindness and humanity are an eternal inspiration through which we can improve this world. This book, which presents stories of the inspiring exploits of the Righteous among the Nations from Ukraine, makes a significant contribution to this sacred mission" he said.

"My friend's mother Raisa Pohrebinska was saved at least six times by six different people from being shot in Babyn Yar and later, throughout the Holocaust, - said The president of the Jewish Confederation of Ukraine Boris Lozhkin on his Facebook page, commenting on the publication of the book,. – She didn't remember their names, or didn't know them at all. According to the rules of the Israel's official memorial to the victims of the Holocaust Yad Vashem, all of them deserve the title of Righteous Among the Nations, but due to the lack of complete data, they cannot officially be called Righteous. These six people, like many others, were not included in the book "Righteous Among the Nations. Ukraine", published by us by the 80th anniversary of the Babyn Yar tragedy. But this did not stop them from being Righteous. The book contains about 2,700 names of Ukrainian Righteous officially recognized by Yad Vashem today... Over time, this list will be replenished, and we will learn the names of the Righteous who are considered nameless today."

The list of names given in the book is not final. The search and establishment of new names continues. Now we already know about 2673 residents of Ukraine, which were awarded this honorary title. However, they were actually far more numerous. Many stories remained unknown, as the Soviet government pursued a policy of oblivion regarding the tragedy of the Holocaust.

As a reminder. On September 29-30, 1941, 33,771 Kyiv Jews were shot in Babyn Yar. During the Nazi occupation of Kyiv from 1941 to 1943, from 70 to 100 thousand people of different nationalities and social and political groups died in Babyn Yar. In total, during the Second World War, the Nazis killed 1.5 million Jews in Ukraine.