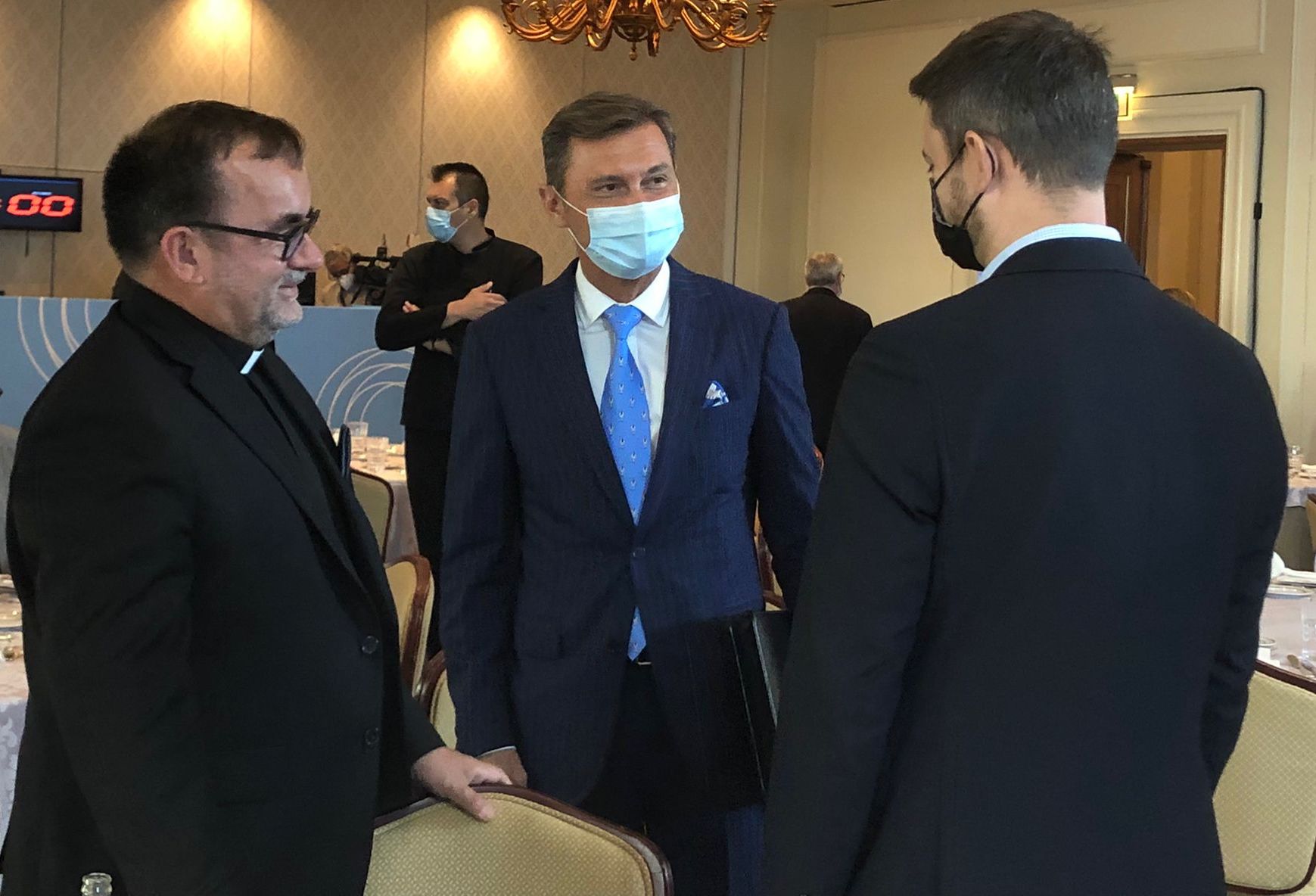 Event marks 80 years since the Nazis massacred more than 33,000 Ukrainian Jews in the forests on the outskirts of Kyiv. Discussion comes ahead of official commemorations at the site on October 6th.

Athens, Greece, - Thursday, 30 September, 2021 - A discussion was held today at the Democracy Forum in Athens, marking exactly 80 years since the Nazi massacre of Ukrainian Jews at Babyn Yar, on the outskirts of the Ukrainian capital Kyiv. In the brutal massacre, in just 48 hours the Nazis shot to death almost all of Kiev Jewry in the ravine known as Babyn Yar.

The discussion was initiated by the Babyn Yar Holocaust Memorial Center, together with the International Holocaust Remembrance Alliance (IHRA), against the background of a concerning rise in antisemitism around the world and addressed ways to combat this dangerous phenomenon. In addition, the participants spoke of the importance of Holocaust remembrance and commemoration in the face of the ongoing trends of historical distortion and Holocaust denial.

The panel which was chaired by Daniel Holtgen, Director of Communications for the Council of Europe, was opened by Greece’s Foreign Minister, Nikos Dendias, who stressed the importance of standing firm in the face of Holocaust denial. He noted, “With all our might we must stand against hatred, and we will continue to promote Holocaust education." He explained that “Neo-Nazi groups are trying to re-emerge in our countries, and although it is a marginal group in Greece their popularity has increased with the economic crisis. We see them as criminals, who deny the Holocaust, and promote neo-Nazi ideas - they have no place at all in Greek society. Their efforts will fail. We will be able to overcome them and not let these ideas rise again.”

Noting the importance of the event taking place on the anniversary of the Babyn Yar Massacre, he concluded, “We are here to fight resolutely for the memory of the victims and the future of our children and future generations.”

Addressing the conference via video from Jerusalem, was Ukrainian born Israeli human rights activist, Natan Sharansky, who now stands as chairman of the Babyn Yar Holocaust Memorial Center. Sharansky spoke about the importance of commemoration not only to honour the victims, but to ensure that the lessons of history are learned in the modern era. He explained that he had grown up near Babyn Yar, and that the Soviet authorities quashed any memory of what had happened there. “The biggest mass grave of the Holocaust is in Babyn Yar. It is the symbol of the Holocaust by Bullets,” he noted, “but it is also the symbol of another crime – the crime of the Soviet Regime that did everything to erase from our memory the Holocaust: the killing of the Jews of Ukraine, of Belarus, of Russia by bullets in the Soviet Union.” He observed, “It was clear that the antisemitic policy of the Soviet Union was closely connected with their efforts to erase the memory of the Holocaust. It was clear then and it is clear today: antisemitism is rising in many countries, in Europe and the United States and together with it is a rise in the efforts to erase the memory of the Holocaust.”

Sharansky added his thanks to the President of Ukraine for all he was doing to promote awareness and understanding of Babyn Yar and the Holocaust in general, and welcomed the cooperation with IHRA. He noted however, “It is almost astonishing, so disappointing that still there are countries that have not accepted the international definition of antisemitism. We should also be very concerned by the efforts of some organisations and governments to distort the history for their immediate political aims.”

Also speaking was Head of the BYMC Academic Council, Father Patrick Debois. He lamented, “What has always surprised me is that Hitler never missed workers to kill. Beginning in 1941 with the German occupation of the Soviet territories the Germans began mass shooting of people everywhere they went. The Germans carried out most of the killings, but they had no difficulty finding partners to help them. Such partners were everywhere: in Ukraine, Poland, Romania, Belarus.”

Speaking about the rise of antisemitism, he noted, "Antisemitism is coming back. It is not only hate speech, now unfortunately in France we hear someone was attacked, or a synagogue is attacked. When the first Jew was killed for being Jewish 12 years ago, we were all in the streets - no no one is in the streets. We have to teach about the Holocaust to show the gravity of antisemitism, to show the connection between hatred and hate crimes.

He spoke about the difference between commemorations of atrocities carried out in a camp like Auschwitz, and the mass murder in mass graves like has been seen like under ISIS. He noted, "There is no memory, and no justice. Only now, after 80 years, has a courageous Memorial Center been built in Babyn Yar after so many years of silence.”

He concluded, "We need to teach about Babyn Yar because of the lesson of antisemitism, and because we must also send a message to ISIS and to Boko Haram, whatever you do today, if you kill 100,000 people in a mass grave, we will come back and you will be found guilty."

Ambassador Lazaris noted that, “We must be careful to make the narrative of the Holocaust accessible to the younger generation, outside the formal education of the classroom, but online.”

Speaking of the difficulties of education about the Holocaust, Mrs. Bokova noted that, “It is very important not just to show the big figures, the huge numbers, but to show the human stories, the faces, the families, the children. Supporting this type of approach like is being done in Babyn Yar, will immensely raise awareness and pass a different message to Ukrainian society and further to understand and remember this terrible crime.”

The Babyn Yar Holocaust Memorial Centre is a non-governmental charity whose purpose is to preserve and cultivate the memory of the Holocaust and the Babyn Yar tragedy in Ukraine, by turning the Babyn Yar area into a place of remembrance. In September 2020, Ukraine’s government, under the auspices of the President of Ukraine, Volodymyr Zelensky, signed a memorandum of understanding and cooperation with BYHMC.

The Memorial Center is currently being built in order to immortalize the stories of the 2.5 million Jews of Eastern Europe, including 1.5 million in Ukraine alone, murdered and buried in mass graves near their homes during the Holocaust.

The Center’s mission is to honour the memory of the victims of the tragedy, and to contribute to the humanization of society through preserving and studying the history of the Holocaust.

Over the past year, several memorials have been erected at the site of the Holocaust-era massacre as part of the establishment of an innovative and expansive museum complex across the whole of the Babyn Yar area. The Center is being guided by public figures and leaders from around the world, chiefly Natan Sharansky, the chairman of the board of the Babyn Yar Holocaust Memorial Center.