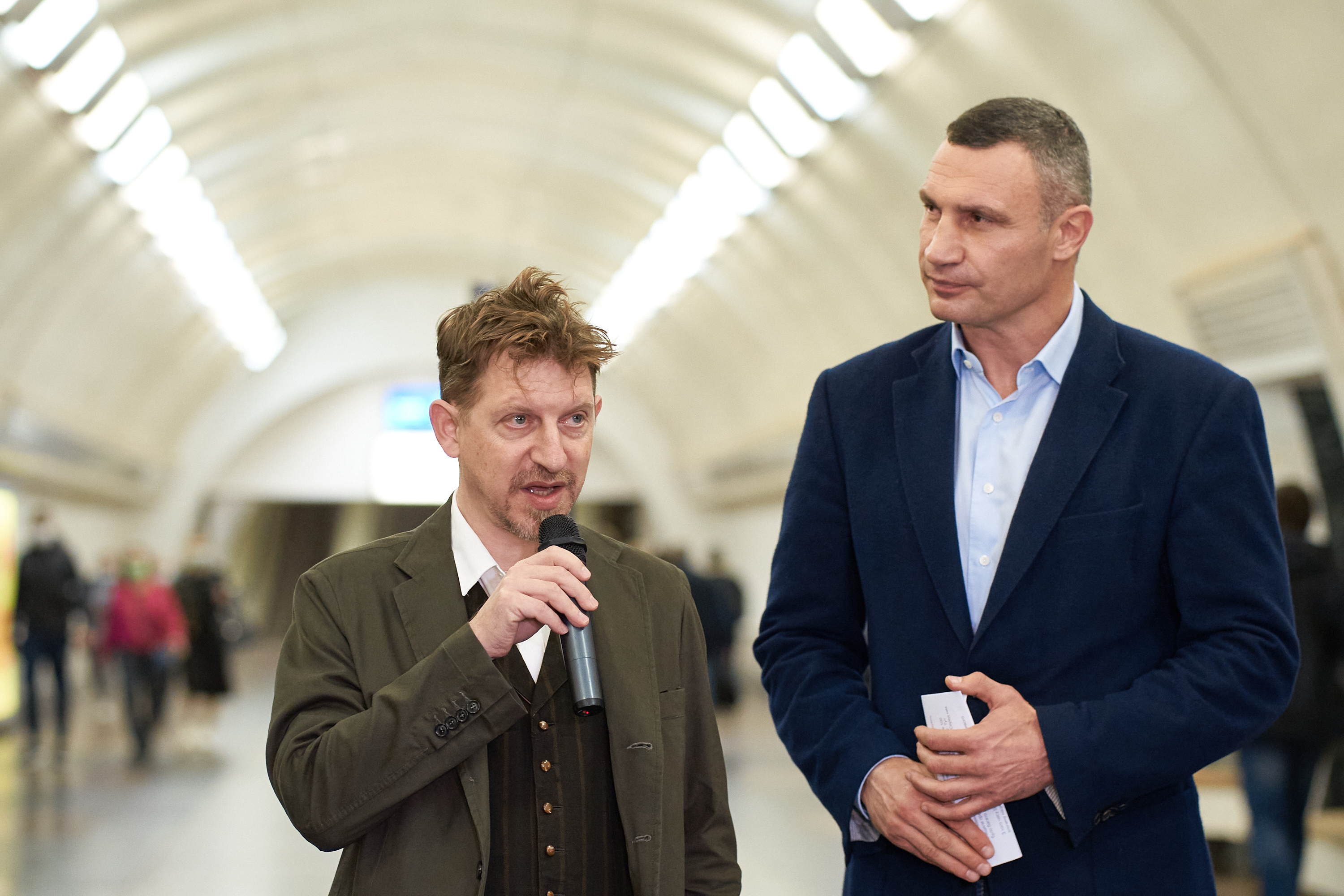 On September 27, Jonathan Littell, an American-French writer opened his personal art exhibition "Exclusion Zone" at the Dorohozhychi underground station in Kyiv. The grand opening with the participation of Kyiv Mayor Vitali Klitschko was organized by the Babyn Yar Holocaust Memorial Center and dedicated to the 80th anniversary of the Babyn Yar tragedy.

The exhibition is placed on advertising panels installed between four escalators of the Dorohozhychi underground station. There are totally 84 photos and 42 text panels.

In his opening speech, Jonathan Littell said that the underground station was chosen as a platform for the exhibition to make it available first of all for people living near Babyn Yar. According to him, a gallery or museum would be less suitable for this purpose, because people who know a lot about the history of the Babyn Yar tragedy have already been there.

"When we were at the ravine and went down to the underground station, we noticed lightboxes standing along the escalators and thought it would be great to make an exhibition there," Jonathan Littell said. - The exhibition at the underground station "Dorohozhychi" is primarily designed for those who live in the area near Babyn Yar, to bring something artistic into their lives. Photos at the exhibition show places where these people live as if in another world. It was created in the form of questions to influence the consciousness of people, so that they ask questions about the place where they live. The exhibition will be here for two weeks, so people coming in and out of the station will be able to see it on their way to work and home".

The opening ceremony was held in the form of a performance. Visitors rode the escalator together with the writer, looking at the exhibition.

For his part, Kyiv Mayor Vitali Klitschko said that such artistic events are necessary to preserve the memory of the Babyn Yar tragedy and prevent such crimes in the future.

"Babyn Yar is a terrible Holocaust symbol. We have gathered now to commemorate the victims of different nationalities, of different ages, elderly people who died here 80 years ago, - said the Mayor of Kyiv VitaliKlitschko. – Here the metro station "Dorohozhychi" is used daily by thousands of Kyiv citizens and guests, thanks to our artists, we are opening an exhibition that will remind of the terrible events that took place in Kyiv in Babyn Yar 80 years ago. The exhibition will be held from today to October 10. I am convinced that everyone who can participate will receive an emotional memory of these events. Why is this done? We remind of terrible times to draw conclusions, and such a terrible tragedy will never happen again in the future. The city of Kyiv supports this symbolic project. Once again, I want to thank the artists who joined us, and all people who are not indifferent, who bend every effort that this terrible event never happens again in the future."

The exhibition "Exclusion Zone" consists of short texts written by writer Jonathan Littell and pictures by French photographer Antoine d'Agata. In a series of questions and metaphorical statements Littell reflects about the place of Babyn Yar in the life of modern Kyiv. He emphasizes the dissonance between the memory of terrible crimes, namely, the shooting of almost 34 thousand Jews on September 29-30, 1941, and the daily routine of apartment blocks near Babyn Yar. D'Agata depicts modern landscapes and residents of the area in his works. The exhibition will be held until October 10.

Director of library and publishing projects at the Babyn Yar Holocaust Memorial Center Oleg Shovenko noted that Jonathan Littell and Antoine d'Agata will continue to work on art projects dedicated to the Babyn Yar tragedy. "This is just the beginning of an outstanding project being created by them about Babyn Yar. This will combine photos and texts and will be an outstanding independent study, conducted for the first time about this area, history and current condition."

Jonathan Littell - American-French writer and public figure. His novel Les Bienveillantes (The Kindly Ones), written on behalf of an SS officer and published in 2006, became a bestseller, won the Goncourt Prize and the Grand Prix of the French Academy. The book mentions the tragedy of Babyn Yar. On the eve of writing the novel, Littell worked for the international humanitarian organization Action Against Hunger, founded in France to overcome hunger in the world. He visited Bosnia and Herzegovina, the Chechen Republic, Sierra Leone, Afghanistan and others on a mission.

Antoine d'Agata is one of the most successful photographers in France, artist and director, member of the Magnum Photos Agency. Winner of the Niépce Prize. In his work, d'Agata explores complex, often taboo topics. Antoine travels a lot and creates his works all over the world.