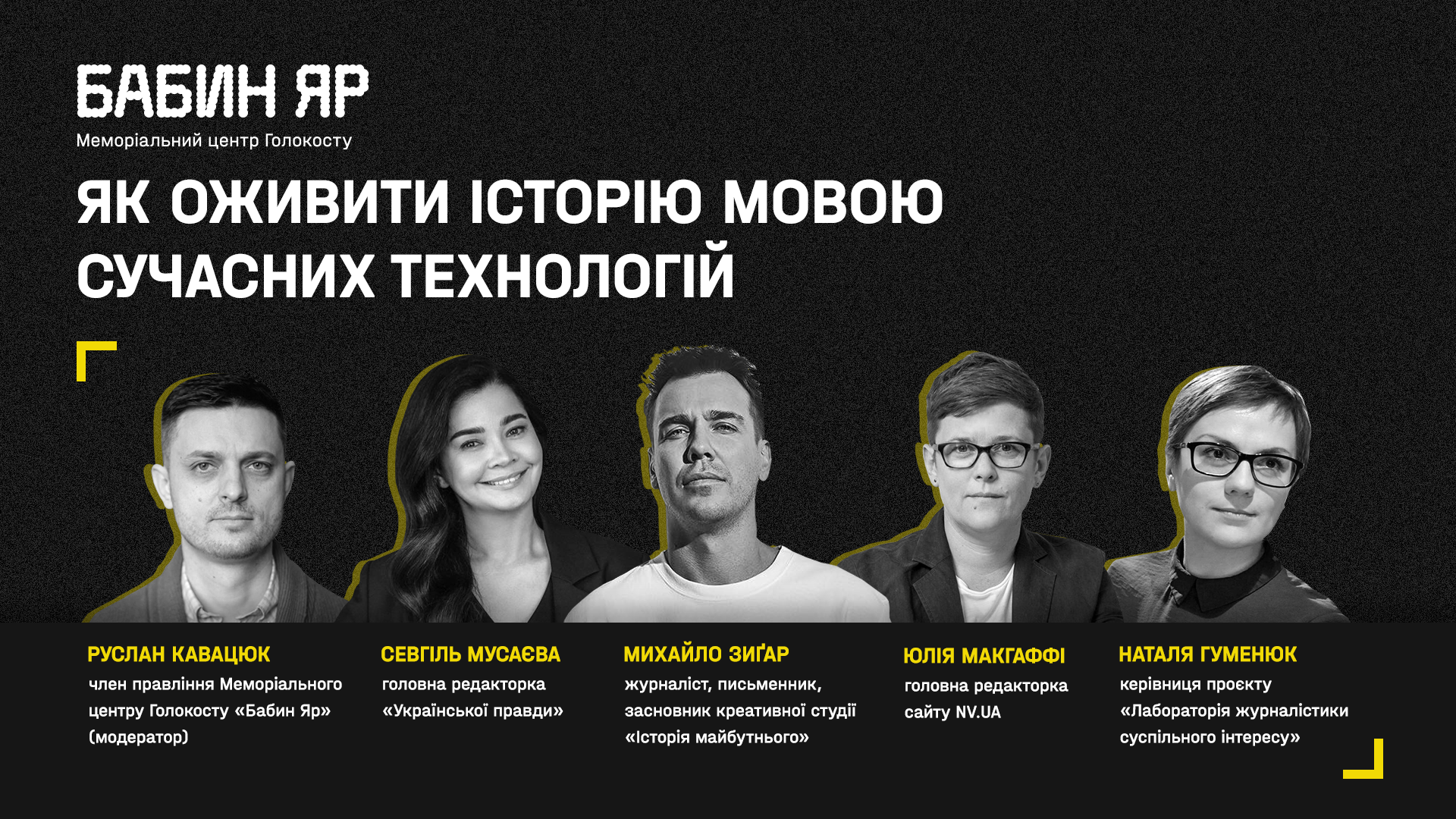 Journalist and writer, founder of the "Stories of the future" Creative Studio  Mikhail Zygar presented historical digital projects "Interactive Diary" and audio performance "29/09", developed for the Babyn Yar Holocaust Memorial Center. The presentation took place as part of a discussion on "How to bring history to life in the language of modern technology", organised by the Memorial Centre.

Mikhail Zygar noted that it was very important to convey history to the modern generation in a way they would understand. To achieve this, it is necessary constantly to invent new formats, genres, and use innovative IT technologies. Speaking about the audio performance "29/09", he noted that the project resembled a theater, but with the use of augmented reality.

"What could be simpler and easier to understand than theatre? But we have another kind of theatre, where we don’t need a stage, tickets or seats for the audience. This is theatre that is always with you, which is inside your mobile phone," he said. - "We have made a play focused not only on Babyn Yar but particularly on one day - September 29. Parallely there are other spaces, other storylines. We can hear and learn what was happening in Berlin, New York, and Stockholm. Charlie Chaplin, Astrid Lindgren, Serge Lifar appear, as well as people in Kyiv who were unaware of what was happening in this place. We hear that at this very moment most people live their ordinary, peaceful, sometimes exciting life. This is important because it brings the events of Babyn Yar closer and makes them recognizable today. We are used to the fact that there can be relative comfort in our lives. However, at the same moment a tragedy was happening somewhere in the world, maybe even in the country where you lived."

Audio performance "29/09" is a mobile application that tells about the fate of tens of thousands of people who went to their deaths in Babyn Yar on September 29, 1941. While going along Yuri Illyenko Street and the alleys of Babyn Yar Memorial Park, you hear the stories of the survivors and the victims. These stories are placed in a global world context, reconstructed from news notes and diary entries of that day from around the world. The path is enhanced by documentary images and visuals using AR technology that appear on the smartphone screen. The audio performance app is free and accessible to everyone. You can download it to your smartphone in App Store or Google Play.

Presenting the project "Interactive Diary", which also tells about the Babyn Yar tragedy, Mikhail Zygar noted that the characters are mostly ordinary people. However, their life choices influenced the course of history.

"This project consists of questions and answers. The first test question should immediately puzzle the person. Because you have to make choices you don't want to. This is not a political choice, it is always a life choice: to help a persecuted person or to think about the safety of your own family. You have to feel how fatal or, on the contrary, life-saving even small steps, even the least efforts can be. That's what the project is about. History is influenced by the choices made by ordinary people, and not just by those, who we consider the most powerful leaders of this world.", - he emphasized.

"Interactive Diary" is a documentary and artistic project based on real events, destinies and actions of real people. It is an attempt to reflect, at least partially, the reality of the genocidal situation. Users go from one question to the other, immersing themselves in the fate of the characters of the time. These questions deepen the historical and psychological understanding of the events of Babyn Yar. Photos of real characters were used wherever possible.

Mass killings similar to the Babyn Yar tragedy are currently taking place in the Middle East and Africa, said a board member of the Babyn Yar Holocaust Memorial Center Ruslan Kavatsyuk. He added that innovative formats allow you to talk about tragedies in such a way that they are not just dry paragraphs from a history textbook.

"I have already suggested several dozen people watching the "Interactive Diary" project and taking part in it. Interesting, stories are very rarely repeated. People make different choices. I have shown the project to people I know and I can see that the choice they make is exactly the story relevant to the person. It's amazing how choice works and, as a consequence, it individualises the story one listens to about a person resembling them in the past," - he said.

Natalia Humenyuk, head of the Public Interest Journalism Lab project, shared her experience in creating historical content for YouTube. She told about her project "Our 30". This YouTube documentary series is dedicated to the 30th anniversary of Ukraine's independence and tells about the history of the 1990s, as well as previous events. The project mentions the country's first eco-activists, members of the miners' strikes, who marched to Kyiv; the Crimean Tatars who returned home; and veterans of the Afghan war, who realised its contradictory nature.

"We did "OUR 30" project about the early 90s, but it's actually based on sociological research about the traumas that resonate for people related to the loss of everything in the early 90s, to that colossal change," Natalia Humeniuk said. - Before the release of the series, we performed a deep research called 'From Wars of Memory to Understanding', in which together with sociologists we studied the attitudes of Ukrainians towards various historical events. And we realized that many people now treat certain pages of history as politics. People in the focus group are sitting, talking about the Second World War, and they react as if they are talking about a kind of show. As soon as you start talking about their real history, let’s say, return from the Afghan war, experiences related to Chernobyl, people become genuine, and it turns out that people of different political views can discuss history together. They can vote for different parties, but they are ready to talk constructively about controversial pages in history."

Participants also discussed the genre of historical podcasts. Editor-in-chief of Ukrainska Pravda Sevgil Musayevanoted that audio formats are gaining more and more popularity due to the fact that they stimulate your imagination and you can listen to them in the background at any time.

"This year we also made a podcast about 30 years of Ukraine's independence. And listening to it on my way somewhere, I clearly imagine everything that is happening: including the referendum, the first presidential elections in Ukraine, and the first day of the declaration of independence in the memories of the participants. Choice of music is very good. And I think it's much better than even a video. We all live in the world of infotainment; everyone has already understood this. Everyone should compete with bloggers for the quality of content"- she emphasized.

Yulia McGuffie, editor-in-chief of NV.UA, added that podcasts and other new formats allow you to update content without linking it to memorable dates.

"In terms of major media outlets in Ukraine on topics such as the Babyn Yar tragedy and the deportation of Crimean Tatars, we are all tied to important dates. For example, on the anniversary of the deportation of the Crimean Tatars, everyone quickly swooped in, produced material and then "ran away". It's the same with Babyn Yar: we remembered, commemorated, and forgot. Editorial task is to keep these topics in the information field. Including, of course, new formats, – noted the editor-in-chief of NV.UA – There is also such a problem in Ukrainian society that nothing happens outside of politics, with very rare exceptions. This is a problem – number one. Problem number two is an algorithm for the audience's response. "I haven't read it, but I condemn it." And such formats as podcasts will still slightly reduce the number of the audience which angrily condemns without reading or listening. Somebody will read and listen."

As a reminder: the Babyn Yar Holocaust Memorial Center also launched a unique educational IT product - the online platform "Red Spot of Memory": https://edu.babynyar.org/. The platform will become a tool for preserving, studying, and researching the history of the Second World War and the Holocaust. It was created as an assistant to history teachers and offers a new method of teaching the school discipline that is interactive and interesting for students. The platform itself and methodological materials for managing educational projects of the platform have been approved by the Ministry of Education and Science of Ukraine.