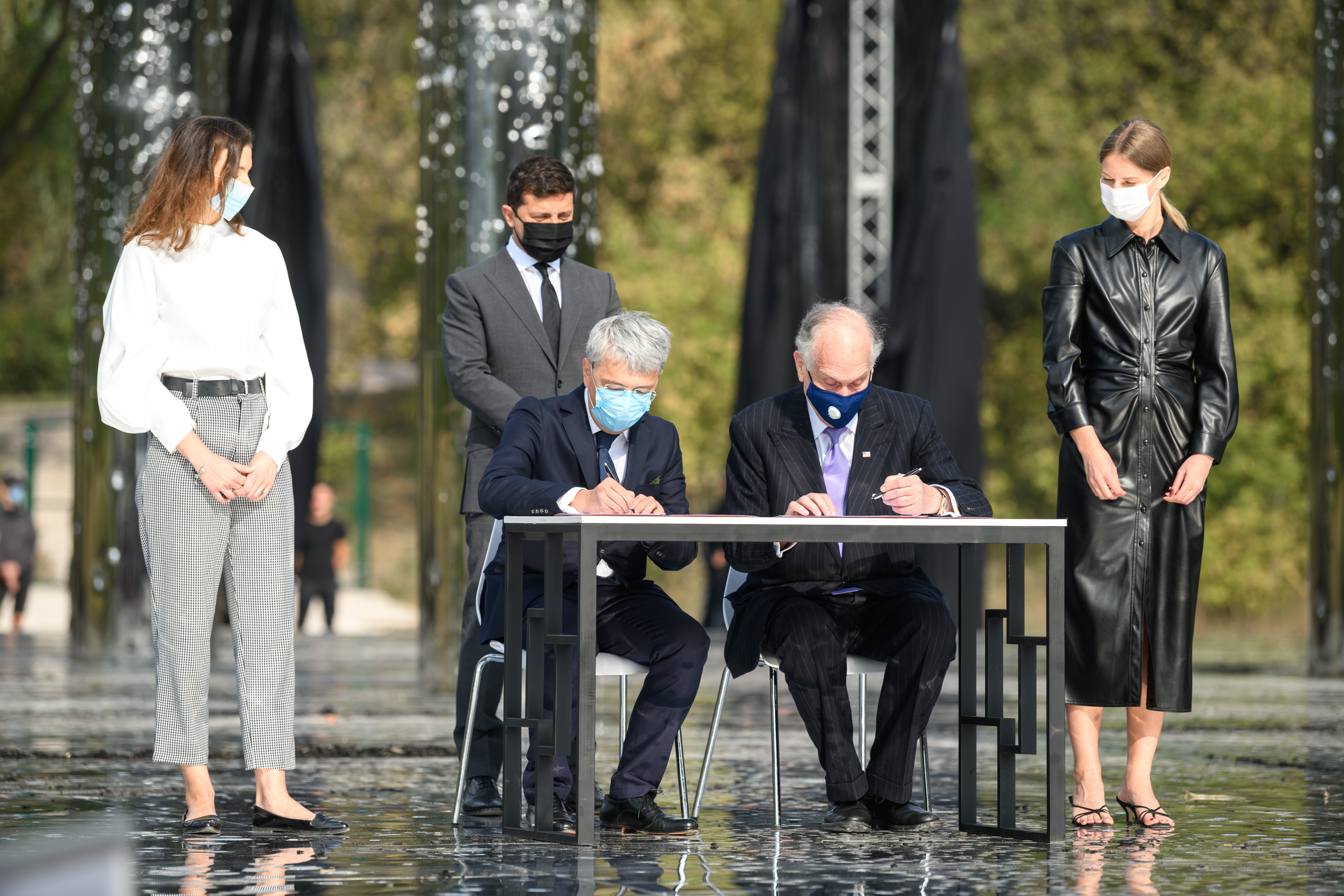 On the occasion of the 79th anniversary of the BABYN YAR tragedy, the Ukrainian government and the BABYN YAR Holocaust Memorial Centre signed a Memorandum of Understanding and Cooperation.

Oleksandr Tkachenko, Minister of Culture and Information Policy of Ukraine, and Ronald Lauder, Member of the Supervisory Board of the BABYN YAR Holocaust Memorial Centre and President of the World Jewish Congress, signed a Memorandum of Cooperation in the presence of the President of Ukraine.

The signing took place directly at the site of the future Memorial immediately after the BABYN YAR memorial ceremony and the opening of a large-scale audio-visual installation presented by the BABYN YAR Holocaust Memorial Centre.

During the discussion about the Memorial, President of Ukraine Volodymyr Zelenskyy noted:

"We must not forget the tragedy of BABYN YAR. We understand that this is not only the history of Ukraine and the Jewish people, it is the tragic history of the whole world. People, especially young people, must be able to come and see the place where thousands of Jews were shot, to realize one of the greatest tragedies of the twentieth century. We must all understand that we cannot allow this to happen again, either in today's world or in the future”.

Welcoming and supporting the initiative and establishment of the BABYN YAR Holocaust Memorial Centre, both sides recognized the need to unite the efforts of the Ukrainian society, state, international community, international and Ukrainian organizations engaged in the study and research of the Holocaust and the BABYN YAR tragedy, aimed at preserving and restoring historical memory in such a way that it becomes a constant reminder of the price people pay for peace.

«This must never be called a disaster, like a hurricane or a flood. This was one of the greatest mass murders in history. And then, a second crime was committed here: covering it all up, so the world would never know. That‘s why today’s ceremony is so important. Almost 80 years after this happened, these tortured souls will finally be remembered with an International Memorial Museum.” – said Ronald Lauder during the signing of the Memorandum.

During the ceremony, President of Ukraine Volodymyr Zelenskyy took part in the opening of a large-scale audio-visual installation in memory of BABYN YAR victims. The installation in the area territory on the occasion of the 79th anniversary of the tragedy was presented by the BABYN YAR Holocaust Memorial Centre. The opening ceremony was prepared by the Ukrainian theatrical director Vlad Troitsky. The author of the installation idea and concept is the Ukrainian-British media artist Maksym Demidenko. The installation was also created by a team of representatives from Ukraine, Israel, the USA and Great Britain, including Denis Shybanov, Daniel Meir, Nick Acorn, Serhiy Krutsenko, Oleksiy Makukhin, Anton Baibakov, Ihor Makhankov, Arina Galantseva, Itzhak Helfgot, Yanky Lemmer, Adam Sheflen, Noam Enbar, Maya Dunietz and others.

The installation is based on the symbol of the Tree of Life, which is found in most religions and mythologies of the world. The BABYN YAR tragedy shows how easily this Tree can be destroyed, and its branches broken. The columns are shot with hundreds of thousands of bullets of the same caliber people in Babyn Yar were killed by. The installation works 24/7, and at night the light and sound from memory passes through the bullet holes.

An algorithm for converting the names of the deceased into sound based on the principle of gematria was created for the audio installation. Each letter in the Hebrew alphabet has a numerical value. The names of the deceased are converted into numbers setting the height of pitch. They are reproduced by an electroacoustic organ. Compositions by modern Ukrainian composers, as well as by Ravel, Schnittke and Shostakovich, are superimposed on this background. There are also archival Kyiv audio recordings, unique pre-war Yiddish songs, ritual biblical music, Ukrainian and Rum memorial songs.

Another fragment of the audio installation, located along the Road of Grief and in the square near the Menorah monument, was built jointly with the National Historical Memorial Preserve Babyn Yar. This audio installation is a source of sounds pouring out of dozens of speakers, and reproducing the names of the deceased. Women's, men's and children's voices are heard from different sides and give the impression of a chorus. They are complemented by Hazan chanters and traditional memorial songs.

In addition, monoculars have been installed in the BABYN YAR Memorial Garden area; they contain the most famous photographs of BABYN YAR taken by the German military photographer Johannes Halle in the days following the shootings of 29-30 September 1941. Thanks to these monoculars, every visitor can now see what the area looked like 79 years ago.